An E84 Coffee Labs Story: A Kitchen at Work that Feels More Like Home 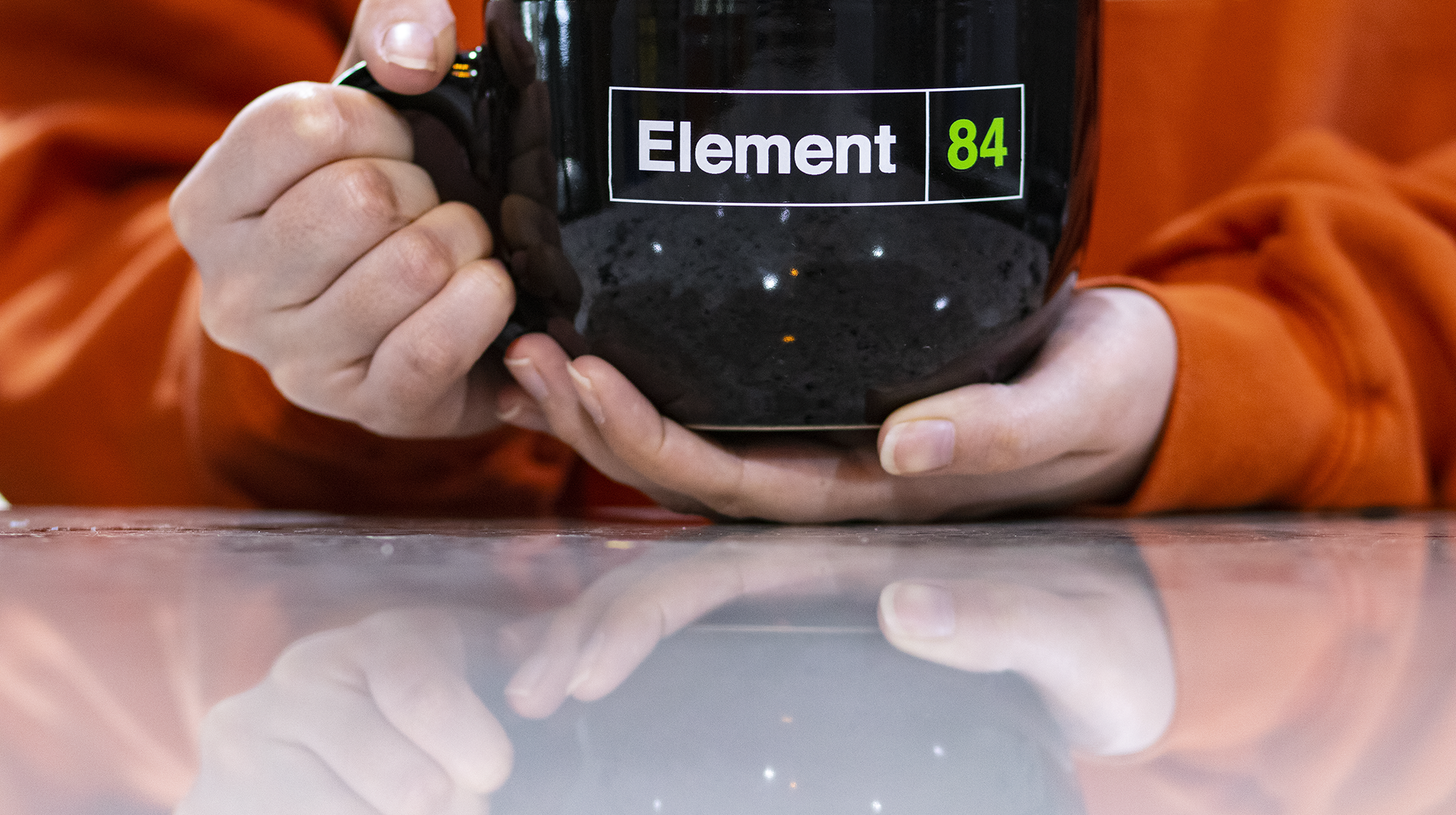 As a part of our new series “E84 Coffee Labs”, we’re exploring Element 84 coffee culture with different members of the team. Coffee is an important aspect of life at Element 84. Everyone has their own unique way of making and enjoying it.

The warm and inviting office space at Element 84 immediately drew me in. The office features exposed brick and wood beams with branded art hung on the walls. Its greatest highlight is a full, functional kitchen with plenty of seating. The work environment I was coming from had completely white washed walls, there was no character in the space.

The kitchen was the worst offense in the office with its dirty microwaves and stuffed fridge. It also lacked a good coffee setup. It had a Flavia machine, which is like a corporate/industrial Keurig machine. The pouches used for the machine look like astronaut-food packs and taste like straight chemical. Beside the machine sat a stack of those little coffee-mate creamer cups that for some scary reason don’t need to be refrigerated. That machine caused me to develop a pretty unhealthy Starbucks relationship.

The day that I was interviewing, the kitchen was buzzing.  My soon-to-be Project Manager had brought in homemade cinnamon rolls. Everyone was gathering and happily chatting in the space, which was a good first impression of the team. Before my interview started, someone offered “water? Tea? Soda? Coffee?” (seriously the drink options at this company are astounding). Someone else jumped in and proudly stated “Yeah, we have this cool espresso machine!”. I declined due to a fear of spilling, but I appreciated how the room made me feel right at home. Plus – if the office had an espresso machine, did this mean I could finally break up with Starbucks?

Flash forward to my first day at E84. I was early, so I wandered into the kitchen for some coffee before my first round of orientation meetings. It was empty so I took my time checking out the espresso machine. Despite how excited I was to use it, it’s kind of an overwhelming machine. There are lots of buttons and lights plus a few icons that don’t make sense until someone explains it to you. I was about to give up and use the Keurig (which is fine with a good K-Cup), when the head of HR and Accounting walked in. She greeted me but then noticed how I was  hovering nervously near the espresso machine. “Oh – do you wanna use that machine? It intimidates everyone the first time, but it’s not hard – here!” she said, then continued to show me how to get it set up and how to use all the different settings. She even showed me how to make myself a latte – my absolute favorite! I’d never interacted with anyone from HR at my old companies in person. I thought it was so cool that despite being “higher up” she jumped in and helped me make a cup of coffee. She didn’t even seem to mind when I poked my head into her office on Day 2 asking “Hey, could you show me how to use that thing again?”.

Since then, I’ve tried to pay it forward and show the next new-joiners how to use the big intimidating espresso machine. The conversations we have while setting up the machine are disarming. When trying to appease one of the machine’s many lights, everyone is on the same level. It’s scary to be the new guy, but figuring out how to use the espresso machine feels almost like a rite of passage (at least for the coffee drinkers), and I think it ends up being a moment of “hey, I got hit with a lot of information today, but I met so-and-so in the kitchen and learned how to use that machine, so that’s one thing!”.

Oh – If you were wondering, no I didn’t break up with Starbucks. I enjoy the ritual of going to the stores too much. Luckily, I’m not reliant on the franchise anymore. Now, I’m only going for a break and to walk around with my work friends!